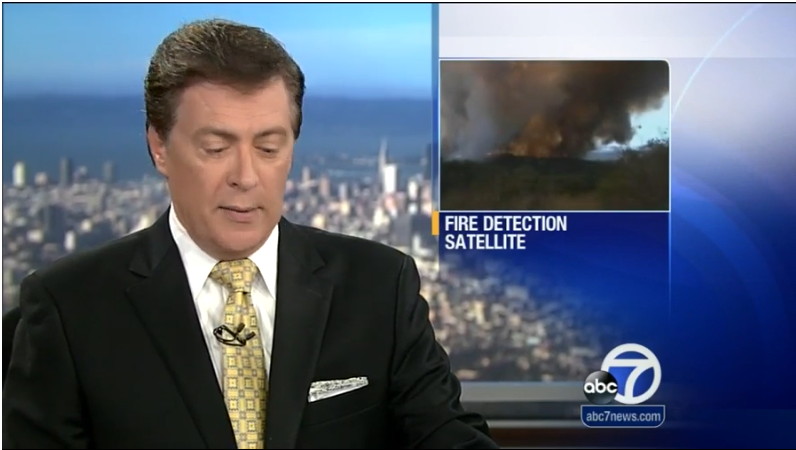 BERKELEY, Calif. (KGO) — There may soon be a way to detect wildfires at an early stage using a system of satellites, planes and drones. The 24/7 system was developed by researchers at UC Berkeley and Lawrence Berkeley National Lab.

Researchers at Lawrence Berkeley National Lab have been working on this for two years. The idea is to detect the fire early — much earlier than firefighters can — by using a coordinated satellite system, making it much easier to get the fire under control.

Researchers at UC Berkeley and Lawrence Berkeley National Laboratory recently developed a system that uses a satellite and drones to detect wildfires at an early stage.

Imagine a satellite 22,000 miles away able to detect a wildfire in California roughly the size of a sandbox. Working 24/7 the satellite can snap pictures every few seconds. Researchers are getting closer to this technology by using planes and drones to get details of the perimeter of the fire, where things are burning and how much energy is being produced within parts of the fire.

The drones and planes will have mounted regular and infrared cameras. Woodrow Wang from the Lawrence Berkeley National Laboratory explained how they work.

“We can connect these [boxes] and have them work together. These are pretty fascinating in that this small little thing, and it’s just really a credit card size… is a single board computer,” Wang said.

That data is then stored and could be accessible to those on the ground.

Researchers at Lawrence Berkeley National Lab have come up with the system that’s not yet put into use. The system is called “FUEGO.”

These drones would be used at night when fire crews are at a disadvantage.

“We have a much better estimate of how big the fire is from infrared,” Pennypacker said. “We think we can get to a fire significantly before [it quickly spreads].”

This would prevent the fires from getting out of control and threatening lives and houses. If funding comes through, the system could be up and running in five years.