FUEGO: a satellite system for rapid location of wildfires

An unchecked wildfire in the Southern California mountains can result in burning more than 100,000 acres of valuable watershed land, threatening lives and property, and costing more than $500 million in fire suppression and damage. Current wildfire detection systems are efficient, but lack sensitivity and rapid response times. Fires that start at the interface of wild and developed lands are often reported randomly by the nearest person, or they may occur out of the line of sight. Furthermore, there is often insufficient monitoring of recently extinguished wildfires, which may lead to new ignitions.

Our University of California (UC) Berkeley-based collaboration of space and fire scientists and geographic information system specialists has proposed a satellite system: the Fire Urgency Estimator on Geosynchronous Orbit (FUEGO), which would search the western US every few minutes (under conditions of moderately clear skies) measuring the high-risk Southern California region at a cadence of every 30 seconds1,2 (see Figure 1). Incorporating a small telescope with a 0.5m-diameter mirror and a 4k×4k mercury cadmium telluride IR detector registering 10 million photons per second, FUEGO would pick up a 10m2 firewithin minutes of ignition. The system’s onboard high-speed processors would calculate signal strengths, measure the growth rate of the fire, take measurements in other spectral bands (so that a fire can be differentiated from the background IR of the sun), and compare the region of interest to its history over the past month. 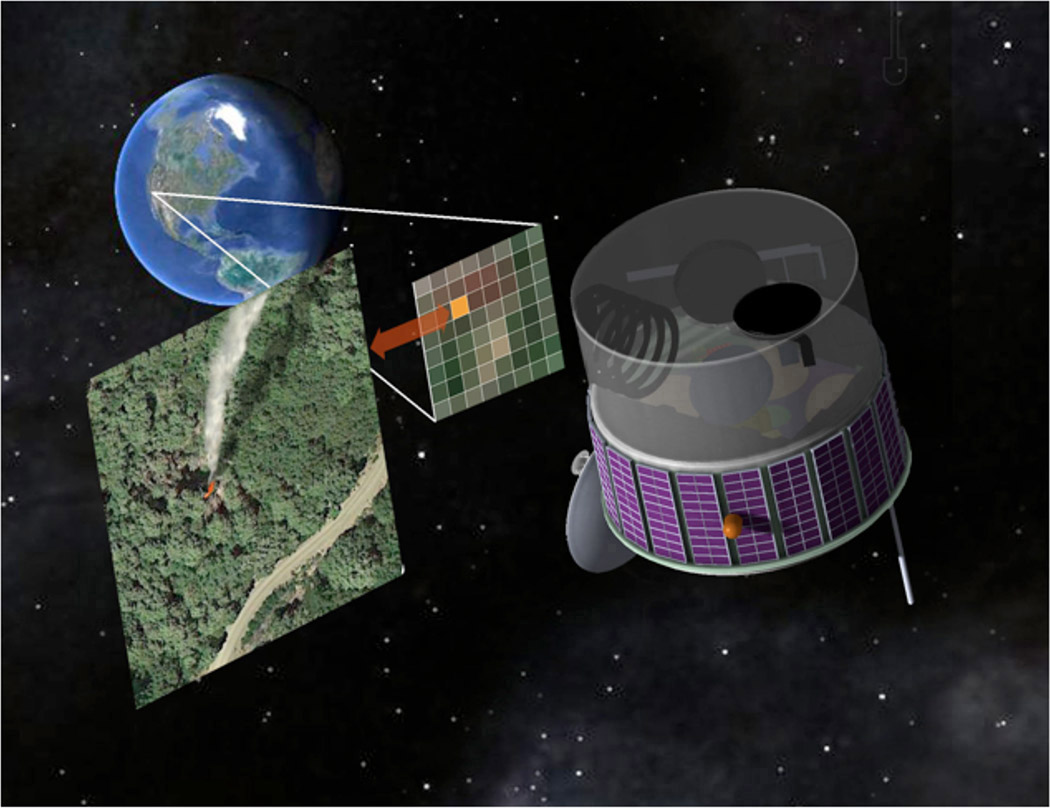 In modeling FUEGO, we undertook studies of the background data from the Geostationary Operational Environmental Satellites (GOES 15), and probed the sensitivity of such a proposed fire detection satellite in geosynchronous orbit. We explored several algorithms that can help reduce false alarms. For example, background signals were greatly suppressed when we sampled images with a much smaller time difference between images. That is, if you wait too long to acquire a new image, background noise appears and starts to swamp the system.

To consider FUEGO’s potential, picture the following scenario: During Santa Ana wind conditions in the Southern California mountains, a group is camping in a remote area. A tiny spark from their small campfire escapes from the enclosure, lands in nearby grass, and starts a small, rapidly spreading fire. The group is out of cell-phone range and it is an hour’s hike to where they could report the fire. Fire lookouts do not have a clear view of the area.

FUEGO’s onboard software systems immediately classify this fire as a very high-risk threat. All fire data is relayed to the FUEGO data center, which confirms that this target is extremely dangerous, given the local wind, fuel, and fire danger conditions. Alarms ring, and dispatch orders go to California’s aerial tanker and ground firefighting resources. Air tankers are attacking the fire within 20 minutes, when the fire is about 600 meters in diameter. The growth and rate of spread is significantly curtailed by the air tanker actions and these hold the fire in check until the arrival of ground firefighting crews. Subsequent suppression action by the air and ground resources contain the fire by nightfall, wherein only 200 acres have burned.

We are currently some years from assembling all the parts required for the system described above. The FUEGO satellite alone would cost several hundred million dollars, and the system will only reach its potential if other aspects are co-developed, for example, aerial tanker fleets. However, the costs associated with research, development, and implementation of FUEGO would likely be paid for many times over (perhaps even in its first year of operation) through the system’s capability to detect wildfires in their incipient stages, report them to the relevant fire agencies, and provide valuable data to responding firefighting systems.

To further develop our proposal, we have convened a collaboration of fire, satellite, and detector thought leaders, and have held our first working group meeting at UC Berkeley, sponsored by the Office of Intellectual Property and Industrial Research Alliances.1Participants at the meeting described the possibility of using Unmanned Aerial Vehicles (UAVs) on long-term surveillance. UAV deployment might enable FUEGO capabilities on a shorter timescale and lower budget, and serve as a productive testbed for algorithms.

Another discussion suggested the possibility of basing FUEGO on existing geosynchronous platforms, so that satellite housekeeping, telecommunications, and power would be provided by the host system, shared with other satellites.

We are planning studies of controlled burns at the University of California in 2014, pending funding. FUEGO is probably the only satellite with enough sensitivity to detect the small burns we plan to start off with, although we are considering whether to undertake a burn large enough to be seen by GOES, for example, or the satellite-borne Moderate-Resolution Imaging Spectroradiometer (MODIS) instruments.