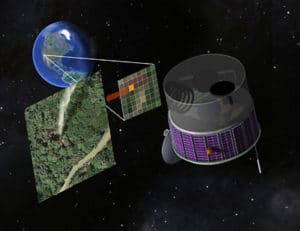 A fire-spotting satellite looking down on the Western United States could help firefighters stamp out small brushfires before they become deadly blazes that destroy hundreds of homes and can cost the U.S. government between US $1 billion and $2 billion each year in suppression costs alone. Such technology also aims to reduce the number of tragedies such as Yarnell, Arizona fire that killed a group of 19 firefighters this summer.

The FUEGO (Fire Urgency Estimator in Geosynchronous Orbit) satellite might pay for itself within just one firefighting season despite costing an estimated several hundred million dollars, said Carl Pennypacker, a physicist at the University of California, Berkeley and scientist at the Lawrence Berkeley National Laboratory, in a press release. Pennypacker recalled the deadly 1991 Oakland fire that destroyed more than 3000 homes in Berkeley and Oakland, killed 25 people, and resulted in $1.5 billion in economic damage.

“With a satellite like this, we will have a good chance of seeing something from orbit before it becomes an Oakland fire,” Pennypacker said. “It could pay for itself in one firefighting season.”

FUEGO was designed as a geostationary satellite dedicated to watching over the dry Western United States—a region that requires hundreds of millions of dollars and thousands of firefighters to battle wildfires every year. Similar satellites could also help other regions of the world such as Australia, where a line of fires is currently raging across 1600 kilometers west of Sydney.

IEEE Spectrum previously covered how satellites have helped put together long-term records of our burning planet since the 1980s. Several environmental satellites have fire-detection capabilities for global wildfire monitoring, but only a few experimental satellites have been dedicated solely to detecting wildfires. FUEGO would complement existing satellites by focusing on finding small fires, so that authorities could contain the blaze more swiftly and prepare in advance for evacuations.

But the idea of a fire-spotting satellite previously ran into the challenge of trying to distinguish a small burning fire from other hotspots such as sunlight shining on a mirror or windshield. To tackle that problem, the UC Berkeley team combined a new generation of cheaper, faster, sensors with faster computer hardware and its own special analysis software.

The software runs several billion calculations per second on images taken every few seconds—a process that could cover the entire Western United States every few minutes.

“Simply put, we believe we have shown that this kind of rapid, sensitive fire detection of areas bigger than 10 feet on a side is probably feasible from space, and we have evidence that the false alarm rate will not be crazy,” Pennypacker explained in the press release.

The UC Berkeley team has filed a patent on the FUEGO satellite design and detailed their plans in an article published in the 17 October online edition of the journal Remote Sensing. Researchers have only tested their FUEGO detection method on existing imagery from real fires so far, but eventually hope to test the system on new emerging fires.