The threat of unprecedented bush/wildfires caused by climate change motivated scientists and organisations to explore cutting-edge technologies for addressing this global issue. Artificial intelligence is one of the most promising technologies to help with bushfire detection, prediction, and risk assessment. Using AI algorithms for tackling problems is not a new idea. Since 1996, the number of publications about machine learning applications in wildfire science has increased significantly.

There is a lot of buzz around the term “artificial intelligence” (A.I.), but what does it mean? There is also much confusion about the differences between machine learning and deep learning. Although these terms are related, they are not interchangeable and have distinct meanings. In this blog, we will try to clarify some of that for you and discuss how artificial intelligence can help mitigate the severity of wildfires.

Let’s start with a very simple definition of artificial intelligence.

What is Artificial Intelligence (AI)?

AI is the umbrella term for a range of technologies and techniques. Artificial intelligence can be defined as “the science and engineering of making intelligent machines”  that do tasks that require human-like intelligence.

In other words, artificial intelligence is the process of teaching computers how to do things that ordinarily require human intelligence, such as understanding natural language and recognising objects by utilising mathematics and logic. In its simplest form, a machine that solves problems (algorithms) based on a set of stipulated rules is considered artificial intelligence.

The Amazon Echo Alexa is an example of an AI-driven product. The Echo Alexa is a voice-activated assistant that can do things such as play music, provide information, and control smart home devices. The Echo Alexa uses artificial intelligence to understand natural language and recognise objects.

What is Machine Learning?

Machine learning is a subset of artificial intelligence where computers are programmed to learn from data without being explicitly programmed. ML uses large amounts of labelled training data to learn connections and trends and then apply these findings to predict future states. For example, Facebook uses machine learning to predict the person’s likelihood of taking the advertiser’s desired action by considering the person’s behaviour, such as clicking on particular ads and outside of Facebook, like visiting a website or purchasing a product.

What is Deep Learning?

Deep learning (DL) is an advanced type of machine learning where algorithms can learn data representations at multiple levels of abstraction. Artificial neural networks are at the heart of deep learning based on the structure and function of the human brain. DL does not require pre-trained data and uses reinforcement learning to identify patterns. This makes the interconnected algorithms better at discriminating between different aspects of data and enables them to learn more complex tasks. It allows the machine to learn from examples and make inferences.

It’s difficult to ensure that a deep learning model doesn’t arrive at incorrect conclusions, as it requires a lot of training to establish the learning methods correctly. However, when it performs as intended, functional deep learning is often perceived as a scientific marvel that is regarded as the basis of genuine artificial intelligence.

Tesla’s self-driving technology is a perfect example. Tesla uses deep learning at scale to train the AI to anticipate the movements and actions of cars, pedestrians, and other moving objects. The neural network learns from correlations between past and future events to predict common and rare actions taken by human drivers and other road users.

Differences between ML and DL

Some potential applications of artificial intelligence and machine learning include:

What are the benefits and risks of Artificial Intelligence?

There are always two sides to a coin, and so does artificial intelligence. On the positive side, AI can help us automate repetitive tasks, make better decisions, and even improve our health. On the negative side, AI can lead to unemployment, data discrimination, and misuse. The key is ensuring that AI is developed and used responsibly to maximise its positive and negative impact.

Risks of AI for society

If not done correctly, AI could quickly become overwhelming and destabilising to the environment and the economy. For example, the high-tech material that makes computer chips is a rare earth metal called selenium. The sheer amount of data processed by these machines requires massive amounts of electricity. In addition, many processors are necessary to make these high-powered AI-based machines function. However, mining the components to produce the processors will put strain on the environment.

One of the major challenges of artificial intelligence is the potential for job loss due to automation. As AI continues to evolve and become more sophisticated, it will likely replace humans in many jobs that are currently performed by humans. This could lead to mass unemployment and increased inequality.

AI systems can quickly learn and remember large amounts of data, leading to unfairness and discrimination in areas such as hiring, lending, or education. If not properly regulated, AI could exacerbate existing inequalities in society.

AI in the wrong Hands

If not properly regulated, AI could be used to manipulate data, spread misinformation, commit automated cyber-attacks, and even cause physical harm. There is also the risk that AI could be used to interfere with elections or other important processes.

Benefits of AI for the society

Increased Efficiency in many Areas of Work

The increased efficiency in many areas of work using AI is undeniable. For example, with the help of AI, we can now optimise our business processes to be faster and more efficient. In addition, AI can help us make more accurate predictions about future trends and customer behaviour, giving us a competitive edge in the market. AI can also help us automate tasks that would otherwise be time-consuming and labour-intensive.

With AI, we can eliminate the possibility of human bias and emotion influencing our decisions. AI can also help us process large amounts of data more quickly and accurately, which can help us make better and more informed decisions.

Some people think that artificial intelligence might pose a threat to humanity in the future as machines become more and more advanced. But others believe artificial intelligence could help us solve some of the world’s most pressing problems. One of these challenges is the global problem of unprecedented wildfires due to climate change becoming more frequent, lasting longer, and more intense.

AI can detect fires faster than humans because it can process data much more quickly and accurately, enabling us to make better decisions regarding wildfires. This is due to the powerful deep learning algorithms that AI uses.

However, we mentioned before that deep learning requires large amounts of data to identify patterns, learn from examples and make predictions. Tesla’s self-driving technology is a perfect example where cameras, code, and the car can navigate autonomously while deciding when to turn, stop, and accelerate based on what is happening on the road. To do this, they need to collect data about how the algorithms work in different scenarios. This data is used to train the AIs, making the cars more autonomous.

Tesla is leading the race to make fully autonomous cars a reality because they can collect enormous data through their customer fleet. By having customers use their cars in different ways, Tesla can get a better understanding of how the algorithms work. This data is then used to improve the autonomous driving features’ performance, giving Tesla competitive advantage.

Similarly, to detect wildfires, we need relevant data. The first sign of fire is smoke. Flames are only observable when the fire is already quite large. Since the objective of an early wildfire detection system is to detect and report fires rapidly, it’s only logical to train such a device to detect smoke. However, teaching artificial intelligence the difference between smoke, fog, cloud etc. needs a large amount of data.

exci’s proprietary advanced AI models are based on deep learning algorithms trained on large datasets with over one billion images per year from ground-based cameras and more than 500,000 satellite images to achieve high accuracy and speed. The geostationary and polar-orbiting satellites used by exci are looking for heat signatures. exci has achieved one of the best latency rates for satellite data and is offering the fastest access and processing time for existing geostationary assets. 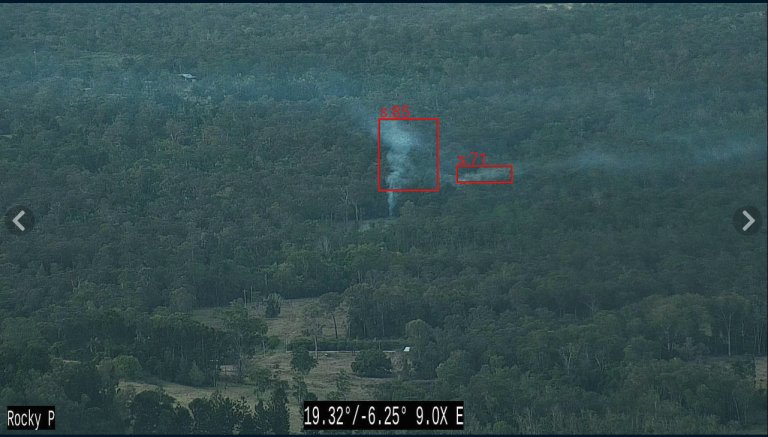 This makes exci’s AI-based system an invaluable tool for wildfire detection, as it can help to quickly identify and respond to fires, minimising significantly the damage caused by wildfires.