Over the last decade, this planet has experienced some of the worst bushfires in recorded history. They can burn for weeks, charring everything in their path. Climate change will worsen this situation, making bushfires more likely, last longer and more intense.

Satellite technology has been utilised for years to estimate weather pattern changes and give warnings of natural disasters. For satellite data to contribute effectively to preventing natural disasters, the timeliness of the information received by the satellites is crucial. For example, once a fire has been ignited, it can quickly reach a speed of over 25 kilometres per hour, consuming everything in its pathway if the fuel’s composition, weather, and topography encourage it. This means that every minute counts to avoid the loss of lives, destruction of our environment and billions of dollars in damages to infrastructure. The best way to reduce the incidence and severity of wildfires is simple: Detect fires early and put them out fast before they get out of control and cause catastrophic damage. While satellite technology is helpful in tracking and monitoring wildfires which can be used to predict their paths, no satellite has been designed specifically for rapid fire detection. Satellites come with their own set of limits when it comes to providing real-time data. In this blog post, we dive into the satellites’ limitations to help you make an informed choice.

There is no real-time data yet

Currently, real-time satellite data do not really exist. Real-time would mean that the data is instantly available, but the time between data capture and data delivery is delayed. Notably, NASA EOSDIS considers the availability of satellite data within 60 minutes of satellite overpass as Real-time data. (see below)

This processing time can be affected by many factors, such as cloud cover, whether the satellite is within range of a groundstation, and the distance between the satellite and the ground. Most satellite imagery providers offer high latency access, which means customers have to wait up to a week after placing an order before receiving usable imagery. This can be problematic for people who need timely information.

Data latency can be a significant issue for those who rely on satellite imagery for mapping or other purposes. Swaths and data latency are crucial factors when working with satellite imagery. Environmental satellites have revolutionised our understanding of the environment, but it is also essential to understand their limitations.

While NASA’s Fire Information for Resource Management System (FIRMS) announced the availability of ultra real-time data (URT) in 2022, which is received, decoded, and processed from MODIS and VIIIRS within 60 seconds, the wildfire can only be detected if the relevant polar-orbiting satellites (Terra, Aqua, or Suomi NPP) overpass the location of a fire. However, it is rare that a fire would ignite at the same time the satellite overpasses, which means that the fire might already be quite large at the time it is detected. The URT data is also only produced throughout CONUS, Puerto Rico and Hawaii.

According to FIRMS, fire data is distributed within three hours of satellite observation. However, imagery is available within four to five hours until it is updated on the FIRMS website, but it can be even longer if there are any hardware errors that can delay the processing time. The VIIRS device generally makes fire points available within 3 hours and 25 minutes after it is detected.

In contrast to low-earth orbiting satellites (LEOS), a geostationary satellite (GEOS) can generate continuous images of the earth and immediately transfer them down to the groundstation since they maintain a direct line with the reception dish. Generally, geostationary operational satellites (GOES) take images every 30 minutes, but during severe weather outbreaks the geostationary satellites might be directed to collect data every 5 to 15 minutes. GOES-16 scans the Western Hemisphere every 15 minutes, the Continental U.S. every five minutes, and for areas of severe weather the satellite can be commanded to take images as frequently as every 30 to 60 seconds (mesoscale images). However, the mesoscale imagery is provided to the area of interest with the highest priority.

Geostationary satellites do not take pictures but scan the area. GOES satellites operated by the National Oceanic and Atmosphere Administration (NOAA) of the United States need approximately 20 to 26 minutes to take a picture by scanning the Earth. The geostationary satellites HIMAWARI-8 and -9, operated by the Japan Meteorological Agency (JMA), take about 10 minutes to create an image before it is transferred to the down station. However, computer programs need between 30 minutes and several hours to process the data of hotspots from the satellite images they receive.

Thus, data processing times can significantly affect the total latency, depending on the observation or product. As pointed out above, not all LEO or polar-orbiting satellites are always within range of a groundstation. While LEO satellites offer much lower latency than GEOS, they require multiple units to be deployed to provide connectivity. Also, satellites don’t capture data constantly. Although LEOS with finer spatial resolution sensors are typically better than geostationary satellites at detecting smaller fires, they only detect the fire when the relevant satellite is overpassing the location. The satellite passes are not equally spaced throughout the day, creating significant time gaps between passes over a certain area. Yet, short revisit times are required to identify sudden and rapidly occurring changes.  Remote sensing satellites such as Aqua, Terra, Landsat and Sentinel are unable to provide near-real-time fire detections due to their high revisit times. This means that the revisit rates could be several hours, with some satellites providing revisit times as much as 5-10 days apart, limiting the ability to detect fires when they are still small.

Also, satellites can only provide a snapshot of what is happening on the ground at a given moment, so it is difficult to track how a fire is spreading over time. This is especially pronounced at high latitudes when there is very little daylight during the winter. For this reason, it is vital to have multiple satellites in order to provide continuous coverage. However, not many satellites are set up with the appropriate hotspot detection algorithms and distribution processes.

How hot is hot enough?

While satellite sensors using thermal bands to collect fire imagery can detect heat signatures from fires, the fire-emitted radiation has to be significantly hotter than its surroundings. If the difference between the temperature of the land and the hotspot is over a given threshold, it will detect the fire.

Although geostationary satellites offer the best chance of detecting fires, they typically fail to detect smaller or more low-intensity fires because of their distance from the Earth. Even though thermal signals show fire intensity, smoke above the fire might make that signal weaker, which is essential for monitoring and tracking fires. If the smoke is hot enough, it may emit its own infrared energy, making it difficult to see through and interpret the images. Smoke coming from oil fires is also relatively opaque and, therefore, can obscure the source of the fire. Another problem is that smouldering fires usually don’t emit as much energy as flaming fires with a higher temperature form of combustion would.

The fire data provided by satellites utilising the MODIS or VIIRS instruments will contain many false positives since the satellites will detect any significant thermal signal.

VIIRS provides a finer spatial resolution of day and night-time imagery than its younger sister MODIS. The day band can detect the smoke’s extent and heat signatures. However, the precise fire location and its size cannot be accurately provided. The data is displayed as fire points, representing a pixel >=375 m high and wide. Detecting a fire point means that somewhere in this pixel, at least one hot spot was detected which may be a wildfire but could also be any other thermal signal, such as oil or natural gas wells.

A fire will generally need to be over two acres in size before it can be detected – bigger if it is burning a low-intensity fuel such as a grassland fire. This is due to the size of the pixels on the satellite sensors.

The accuracy of the location of the fire is based on the ground sample distance of the satellite pixels (distance between two consecutive pixel centres measured on the ground). For the HIMAWARI satellite, the pixels approximate a 2km grid. Each pixel containing a satellite detection will represent a single grid square within which the fire can be located. Smouldering fires also radiate less energy than flaming fires.

Satellite fire detection systems such as MODIS or VIIRS are incapable of detecting active fires when cloud cover is present. While SWIR instruments enable a satellite to see through clouds, they are expensive, and the images it produces are often of lower quality than those made by other imaging technologies. Some of the satellites that have SWIR instruments on board include the Landsat-8/-9 satellite, the Sentinel-2 satellite, and the WorldView-3 satellite. WorldView-3 is a commercial satellite offering very high-resolution data. Although these satellites can detect active fires with 20 m to 30 m spatial resolution, their low temporal resolution offers limited capability for active and early fire detection – Sentinel-2 needs five days to revisit and Landsat-8/-9 even eight days.

Bear in mind that while China, Europe, Japan, and the USA allow the free exchange of meteorological data, there are not enough satellites set up with fire detection algorithms and distribution processes that make fire detection data freely available to fire agencies.

There is no doubt that satellite technology provides crucial data that can help to monitor, understand, model, predict and act on climate change and its related challenges, such as extreme wildfire events. However, satellite design involves many tradeoffs. The limitations mentioned above prevent satellites from detecting wildfires early, at the very least not sooner than a fire lookout. In an interview, the CEO of OroraTech said that it would take them several years to achieve a detection time of 30 minutes with the launch of their entire nano-satellite constellation equipped with thermal-infrared cameras/sensors. Currently, eight hours can pass until the satellites OroraTech relies on report a fire. In addition, Northern Sky Research senior analyst Prachi Kawade emphasised that while the total Earth observation market will expand from $3.5 billion to $8.8 billion in the next 10 years, satellite-enabled wildfire services will only make up a small part of the market.

However, a key determinant of whether a fire turns into a large and devastating fire is the time between ignition, detection, and first attack response. Every minute counts! Once a fire has been ignited, it can quickly reach a speed of over 25 kilometres per hour, consuming everything in its pathway if the fuel’s composition, weather, wind, and topography encourage it. 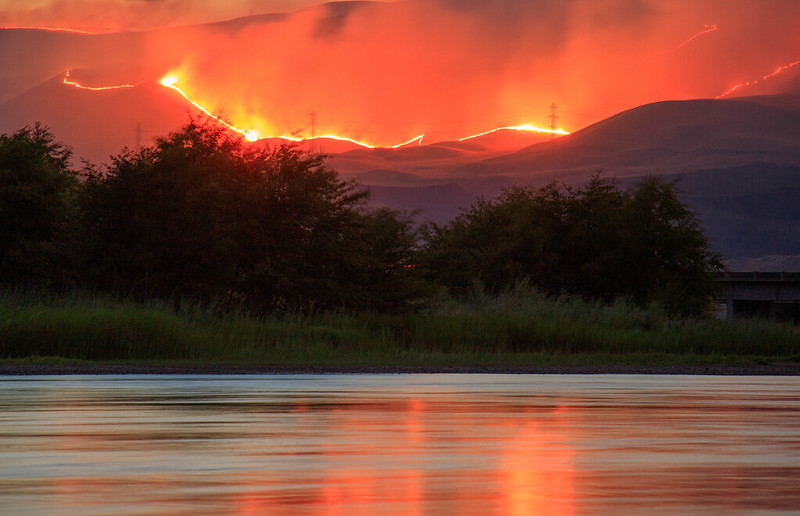 To offset satellites’ limitations, exci has combined ground-based camera data with satellite data (geostationary and polar-orbiting) that are analysed by exci’s proprietary deep machine learning algorithms for the presence of smoke and heat. While the ground-based camera system provides fast detection during the day, satellites are better suited for remote and broad area coverage, night-time detections, monitoring, and to provide comprehensive coverage in all weather conditions.

Read more about how exci detects bush/wildfires much faster (within minutes after ignition) by combining satellite data with ground-based camera data that are analysed by deep machine learning algorithms. https://www.exci.ai/ 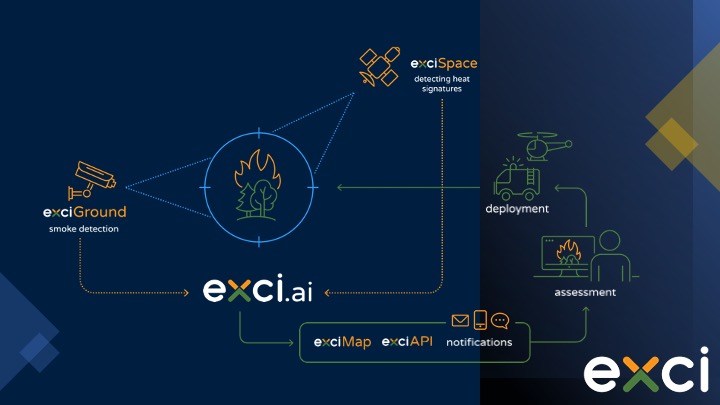 Check out the following blog articles:

Part 1: Satellites in Space: Watching over our Planet