The evolution of wildfire detection solutions

A key determinant of whether a bushfire turns into a large and devastating fire is the time between ignition, detection, and first attack response. Therefore, a critical component of community resilience is the existence of local early warning systems, enabling rapid response and initial attack procedures of firefighting crews. One of the earliest systems to protect people and their environment was fire lookouts. They played a crucial role in the front-line efforts to detect wildfires early to keep them small.

What is a fire lookout tower?

A typical fire lookout tower consists of a platform, usually enclosed with a 360-degree view, made of steel or wood, which is located on a mountain top with high elevation. Its purpose is to provide housing and protection for a fire watcher who has been assigned to observe and report fires in a specific, often remote area. Fire towers are typically manned by trained observers who scan the landscape for signs of fire. Until today, fire lookout/fire watchers still use binoculars or a telescope to scan the area for signs of fire. If a fire is spotted, the fire lookout uses radio or telephone to report the fire to the appropriate authorities.

It’s hard to imagine a time when fire lookout towers were the primary way of detecting and fighting forest fires. Fire lookout towers had a number of advantages over other methods of fire detection. For one thing, they allowed firefighters to have a bird’s-eye view of the entire area they were patrolling. This gave them a much better idea of where fires were starting and how they were spreading. Additionally, fire lookout towers could be staffed by just one or two people, whereas earlier methods, like sending out teams of people on horseback or using binoculars from a distance, required far more manpower.

Of course, fire lookout towers had their disadvantages as well. One of the biggest was that they were very vulnerable to bad weather. If a fire tower was located in an area that was prone to high winds, it could easily be toppled over. Additionally, fire lookouts were often located in remote, isolated areas, which made it difficult for firefighters to get to them quickly in the event of an emergency.

Despite these drawbacks, fire lookout towers remained the primary method of fire detection for many years. It wasn’t until the development of aerial firefighting in the mid-20th century that they began to be phased out. Today, fire lookouts are still used in some parts of the world, but their numbers have dwindled considerably. For many people, they’re a reminder of a simpler time when humans had to rely on their own eyes and ears to detect fires.

Fire lookouts have been used for centuries, with the first recorded use being in ancient Persia. The Tuztoromy Firewatch Tower in Sopron, Hungary, is thought to be the oldest fire lookout tower in the world, constructed in the 13th century and restored in 1681 after the town fire of 1676. In the United States, fire lookouts were used as early as 1855, but they became more common after the devastating wildfires of 1910, referred to as the “Big Blowup”. These fires, which burned over 3 million acres (12,000 km2) and killed 87 people (mostly firefighters), led to a  nationwide push for better fire detection and fire suppression. In the years following the fire, the United States Forest Service began to build fire lookout towers throughout the country. These towers were used to help spot fires and to help keep track of their location and size.

Fire towers were constructed of metal, stone, or wood, and were typically located on high points in the landscape. From these towers, fire lookouts could see for many miles in all directions. Steel towers replaced the log structures in the 1930s, and by the 1940s there were over 8,000 fire towers in operation in the United States.

In the United States, the first lookout was a heavy-duty iron bell tower, which was erected in 1856 on a hilltop in downtown Harlem, New York, what is now known as Marcus Garvey City Park. 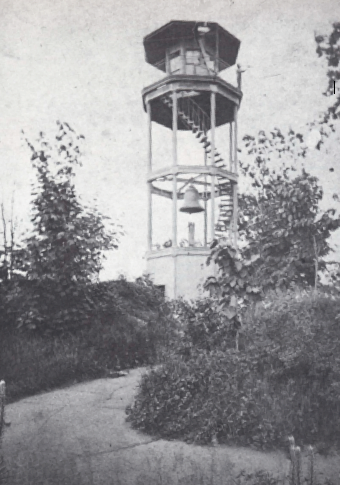 The first fire lookout solely for the protection of American forests was built near Bertha Hill in Idaho’s Headquarters Valley in 1902. A female timber camp cook named Mable Gray was asked by her boss to climb up the makeshift ladder on top of a 12 feet fir tree to look for smoke after she had done her morning dishes. When she detected smoke, she rode on her horse back to the camp and alerted the crew.

Australia has a long history of devastating bushfires, resulting in loss of life and property. One of the most notable bushfires in Australian history was the Black Saturday bushfire that occurred on February 7th, 2009. This bushfire resulted in 173 fatalities and 414 injuries. It also destroyed over 2,000 homes and 3,500 structures. In response to this devastating bushfire, many new fire towers were built throughout Victoria.

In Australia, using the first fire towers to detect fires early dates back to the early 1900s. In those times, a fire lookout was often a tall tree with an added platform at the top and pegs or spikes were driven into the side of the tree that gave the fire watcher access to the top of it. Later on, the towers were originally wooden structures, but over time they were replaced with steel and concrete structures.

In the early days of fire lookouts, most fire lookouts were volunteers. They would watch for fires from their fire tower for hours at a time, often in very hot and uncomfortable conditions. They were paid a small salary, but most of their income came from selling firewood or other goods they produced from their land. Between 1909 and 1949, the only means of communication were telephones which were gradually abandoned in the early 1950s with the increase of radio communications. Being a fire tower watchman/woman is a solitary task, with eight to nine-hour shifts that are most of the time uneventful. In this job, one needs to be able to occupy themselves by keeping a meditative peace with their surroundings. One of the main job requisites is having no fear of heights and having strong nerves when it gets really windy at 85 km per hour, and the tower starts shaking and leaning to one side. Staring at the surroundings for hours and still staying concentrated on the task at hand is a big challenge. The human brain is only able to maintain focus for around 45 to 50 minutes, especially when the task is as monotonous as watching out for fires.

While fire towers have been originally built to help detect bushfires, over time, they have become an important part of the country’s infrastructure. Towers are now used for a variety of purposes, including communication, observation and even tourism.

Artificial intelligence is one of the most promising technologies that can help with bushfire detection, prediction, and risk assessment.

As climate change intensifies, bushfires will become more frequent, intense and severe, having extreme and lasting impacts on lives, the environment and the economy.

According to the UN Environment Programme (UNEP) and GRID-Arendal report, extreme wildfires are expected to increase up to 14 per cent by 2030, 30 per cent by the end of 2050, and 50 per cent by 2100 due to climate change and land-use change.

However, promising insights and data are indicating that AI could be the drawcard for helping tackle not only climate-related issues but several of the UN’s Sustainable Development Goals. AI can detect fires faster than humans because it can process data much more quickly and accurately, enabling us to make better decisions regarding wildfires. This is due to the powerful deep learning algorithms that AI uses.

exci offers an innovative solution to the global problem of unprecedented wildfires caused by climate change. exci’s early wildfire detection system is powered by deep machine learning algorithms (advanced AI), which have been trained on large data sets with over one billion images per year from ground-based cameras and over 500,000 satellite images to achieve high accuracy and speed in recognising and raising the alarm about new fires. By analysing satellite and ground-based sensor data for the presence of smoke and heat, exci’s deep learning algorithms can automatically detect bushfires within minutes. Even small fires are automatically detected within minutes, with a near-zero rate of false positives.

This makes exci’s AI-based system an invaluable tool for wildfire detection, as it can help to quickly identify and respond to fires, minimising significantly the social, environmental and economic impact caused by wildfires.

The final days of the fire lookouts

In the past, fire lookouts were the primary method of detecting fires. Today, however, there are many other methods of detecting fires, with new innovative technologies such as artificial intelligence, remotely piloted aircraft systems, or remote sensing.

As a result, fire lookouts are used more for locating and monitoring fires that have already been detected, rather than for detecting fires. In many cases, fire lookouts are equipped with radios and GPS units so that they can quickly relay the location of a fire to fire control officials. Besides using binoculars or telescopes to help them locate fires, they may even use drones to help find fires in difficult-to-reach areas. For the time being, humans’ experience and knowledge of a fire’s behaviour to put a fire in context is still needed.

However, as history shows, throughout our culture, automation replaced various human jobs. During the Industrial Revolution, steam-powered machines drove unprecedented growth of previously hand-made items. Machines started to sow the seeds and also harvest them. Since the 20th century, vehicles are manufactured by robots. While the robots spray-paint and fix windscreens into vehicles, humans took over the job of supervising them.

With the increasing number, intensity and frequency of bushfires, there is an urgent need to detect bushfires as quickly as possible following ignition to rapidly attack, contain and extinguish fires before they get out of control and have far-reaching and catastrophic consequences on people’s lives and their environment. Climate change is one of the biggest sustainability challenges humanity faces, and the situation is only going to get worse. Only with the help of new and innovative technologies such as exci’s early wildfire detection system, can we meet the 17 Sustainable Development Goals to protect our planet for future generations.